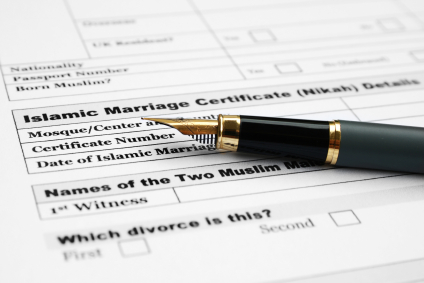 All praise belongs to Allah and may Allah’s peace and blessings be upon His messenger, his family, companions and followers until the last day.

The correct procedure for Islamic divorces or marriage dissolutions in non-Muslim countries is a significant topic that has been neglected by many Muslims in non-Muslim states. There are some fundamental details that many Muslims in the UK are unaware of, and as a result, we find many within the Muslim community falling prey to major misunderstandings. Many questions and cases presented to the Islamic Shari’ah Council (or fatwa line) are extremely shocking whereby Muslims fall into major sins and grave blunders due to their ignorance of the different rulings regarding marriage dissolution or divorce. The following points briefly illustrate the ways in which an Islamic marriage comes to an end. Ending a marriage in Islam can take place by one of three main methods:

All of the Islamic (legal) schools of thoughts agree that the Islamic judge who implements Islamic law must be privy to certain requirements such as being a Muslim. In the Qur’an it is stated,

“And never will Allah grant to the disbelievers a way (to triumph) over the believers.”

It is not known that any scholar accepted a verdict issued by a non-Muslim (or non-Muslim body) on such issues. It seems that such a phenomenon is quite recent where some muftis and fatwa bodies have invented an opinion whereby the judgment of a non-Muslim judge is accepted. They attempt to justify this by claiming that being a citizen implies that you accept the law of land, and that any person who has accepted the citizenship of a country has appointed the non-Islamic judiciary to act on his behalf in dissolving his/her marriage. In response to these claims it should be initially noted that being a citizen of a state does not imply that a Muslim will accept all non-Islamic laws. Can Muslims accept non-Islamic inheritance law that prevails in western European non-Muslim countries? As for the claim that by accepting citizenship, the Muslim individual is delegating his right to divorce to the judiciary system of his country, then the response to this is such designation should be clear and explicit.
In conclusion, I would like to affirm that the divorce issued by the civil court in response to the wife’s request is neither a valid divorce nor legitimate marriage dissolution. This means that such a wife remains a wife and is not free to marry another man. Marrying another man while the original marriage is still in place is a violation of Islamic law and a crime. What is more dangerous than this is the fact that all children she gives birth to before obtaining a proper marriage dissolution may be considered to be of the first husband from whom she assumed she had been divorced.
Wives who face intolerable situations may seek marriage dissolution by a recognized body that is known and accepted in acting as a judiciary body for Muslims. No single imam or Mufti can do that by himself.
And Allah the Most High is Most Knowledgeable.
Source: https://www.islam21c.com/fataawa/912-fatwa-a-civil-divorce-is-not-a-valid-islamic-divorce/
Share this article:

Select a service and add some details to create your case

Be sure to fill all fields

Are you sure you want to cancel this appointment? This action cannot be undone